With more and more awareness that spreads regarding environmental preservation, people are leaning towards a greener approach in their everyday lives. Like Mumbai Airport decided to go plastic-free from October and fine those meddling with the no-plastic rule, we also hear people making changes in their weddings to help curb wastage.

Similarly, when Pranshu Kankane, a businessman, was to get married, he decided on a more eco-friendly arrangement by sharing potted plants instead of wedding cards as invites

Pranshu and his brother Prateek from Bhopal were always fascinated by the idea of an eco-friendly wedding. Since they wanted to reduce paper waste, they decided on sending e-invites first. The invite had specific instructions like “Do not bring bouquets”, “Do not waste food in plates, Avoid using single-use plastic bottles”, etc. 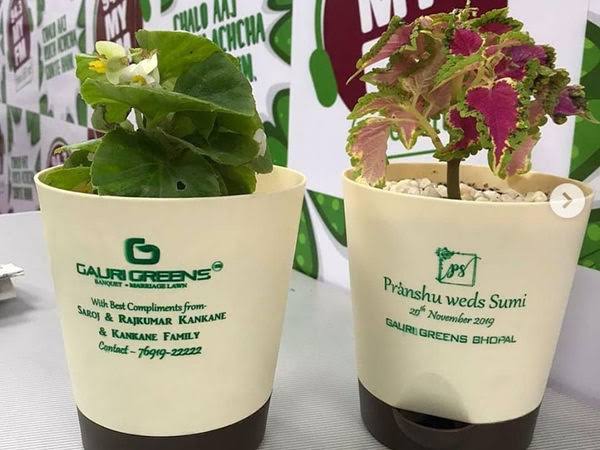 However, their mother said that by sending e-invites, they will not be able to personally meet and greet the invitees. Hence, the two came up with a better plan.

The brothers decided to use potted plants as invites by printing the information on the pot. The plants were all 8-10 months old and can easily survive indoors for 3-4 years.

Prateek said, I did not expect the reaction we received. People were extremely excited with the invites and as we had 4-5 varieties of plants, including spiritual ones such as Tulsi, they were enthusiastic to pick their invite.

The potted plants were almost the same cost as the wedding cards. They wanted to show that an eco-friendly wedding is also cost-effective to motivate people to take a greener approach. The two brothers also spent 10-15 minutes with each guest to explain to them how to take care of the plants.

Besides paper waste, another major concern was food wastage. Hence, they collaborated with an organization named Robin Hood Army who collects surplus food from weddings and distributes it to those in need.

We hope more people take an alternative green approach to make wedding arrangements. It will not just help the environment but will also save a lot of money