Arham Foundation in association with Gyan-key library hanger and Books for Village Rural Areas of Vietnam successfully completed the first international walk for Book for Rural India on 11th and 12th February 2020 in Camp, Pune and Saswad, Maharashtra, India respectively. The walk symbolized the steps towards the end of illiteracy across the world. The aim of the walk reflects emphatically in its statement “Books for Rural India. Books for World Children’s Right to Read. Books for Fighting Climate Change. 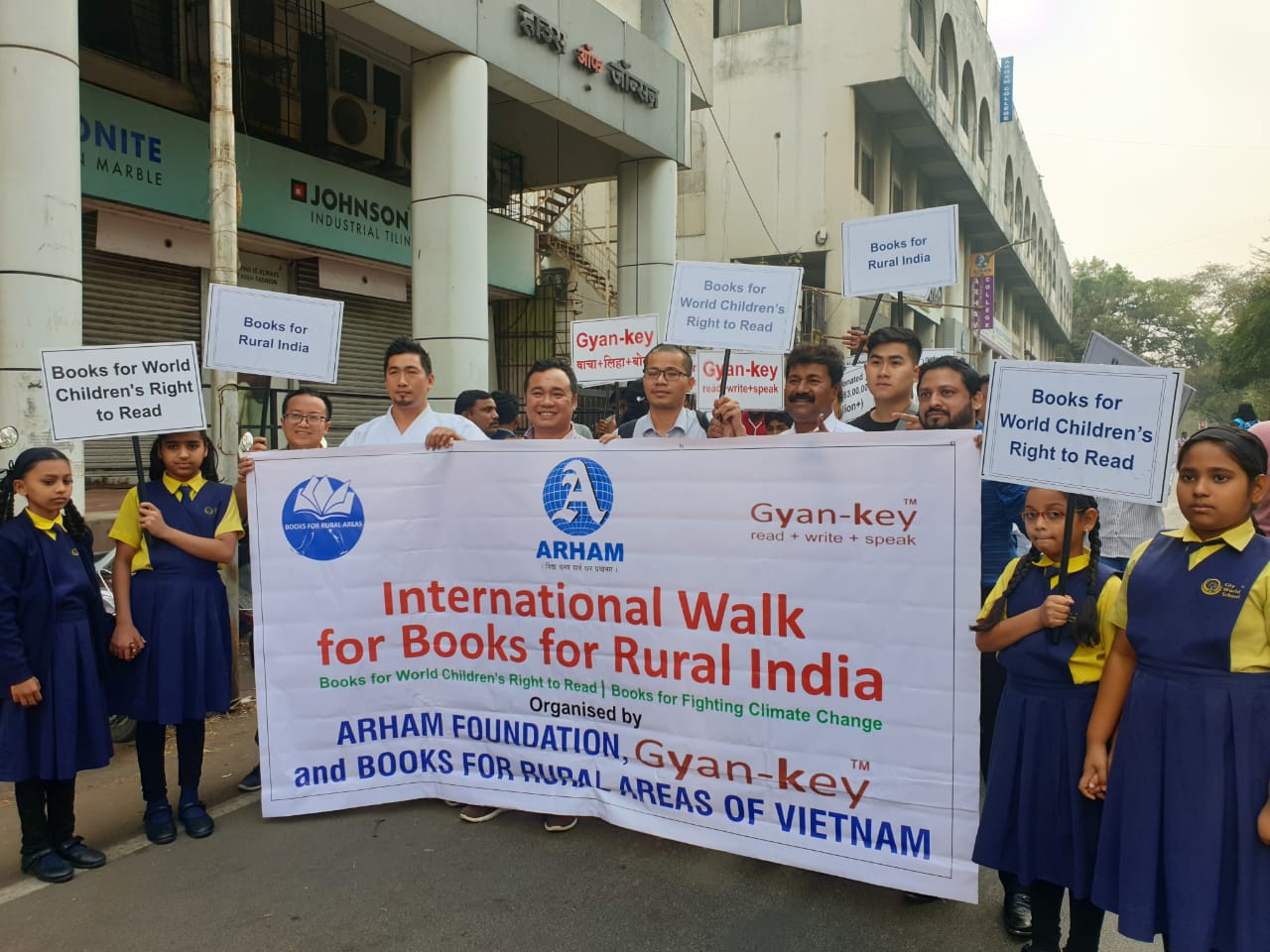 Indian change agents including Mr. Pradeep Lokhande (a library revolutionary, who established ‘Gyan-key Hangers’) with his Indian fellows; and Dr. Atish Chordiya  (an Academician who is also Co-Founder of Arham Foundation (Pune), with his Indian fellows; and more than 350 students, teachers, parents, journalists, writers who live in Pune city, Saswad town and Mumbai participated in the walk. Besides that, Mr. Nguyen Quang Thach - the founder of Books for Rural Areas of Vietnam, co-organized the walk and other four Vietnamese supporting the idea Books for Rural India with two representing their organizations including Mr. Vu Van Thoai, Chairman of Institute of Sandalwood and Rare Flora, Vietnam and Mr. Tran Van Loi, Representative of Nghia Dung Karate- Vietnam, and personally Mr. Phung Minh Chau and Pham Manh Cuong, participated in the international walk. 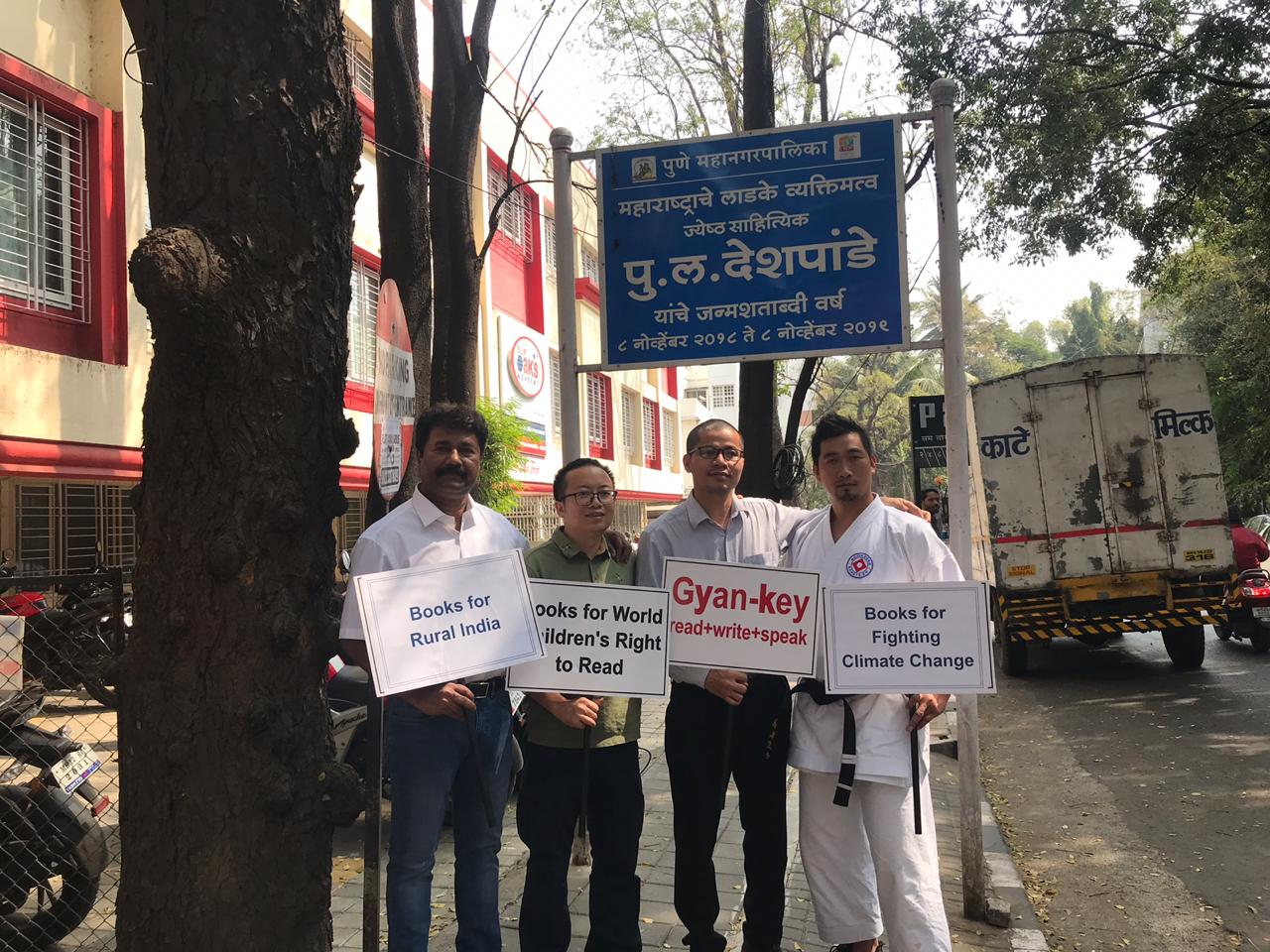 On 11th February 2020, the walk was flagged off from Arham School and Junior College located in Camp, Pune and traversed through Golibar Maidan-M.G. Road-Ambedkar Road- Quarter Gate-Back to Arham School and Junior College. The participants visited Late. P.L. Deshpande’s house and Annabhau Sathe’s statue at Sarasbaug to pay tribute to their immense contribution to Marathi literature.

On 12th February 2020, the walk flagged off from Shivaji Statue, Saswad and traversed through Saswad town towards Late. P.K. Atre’s (renowned author) house in Saswad. The children in the walk held the placards of ‘Books for Rural India’, ‘Read+Write+Speak’, ‘Books for Fighting Climate Change’, ‘Books for World Children’s Right to Read’ and shouted slogan in local language ‘Marathi’ like ‘Wachal Tar Jinkal’ means ‘If you will read, you will be a winner’ and ‘Granth hech Guru’ means ‘Books are real Teachers’. They also pledged to read books donated to their classroom and send their reviews to the donors after reading the various books.

The walk attracted many people and mass media of India. Walks were provided all the support by both the local municipal corporations of Pune and Saswad, traffic and local police. It was also widely published and broadcasted in local and national media. 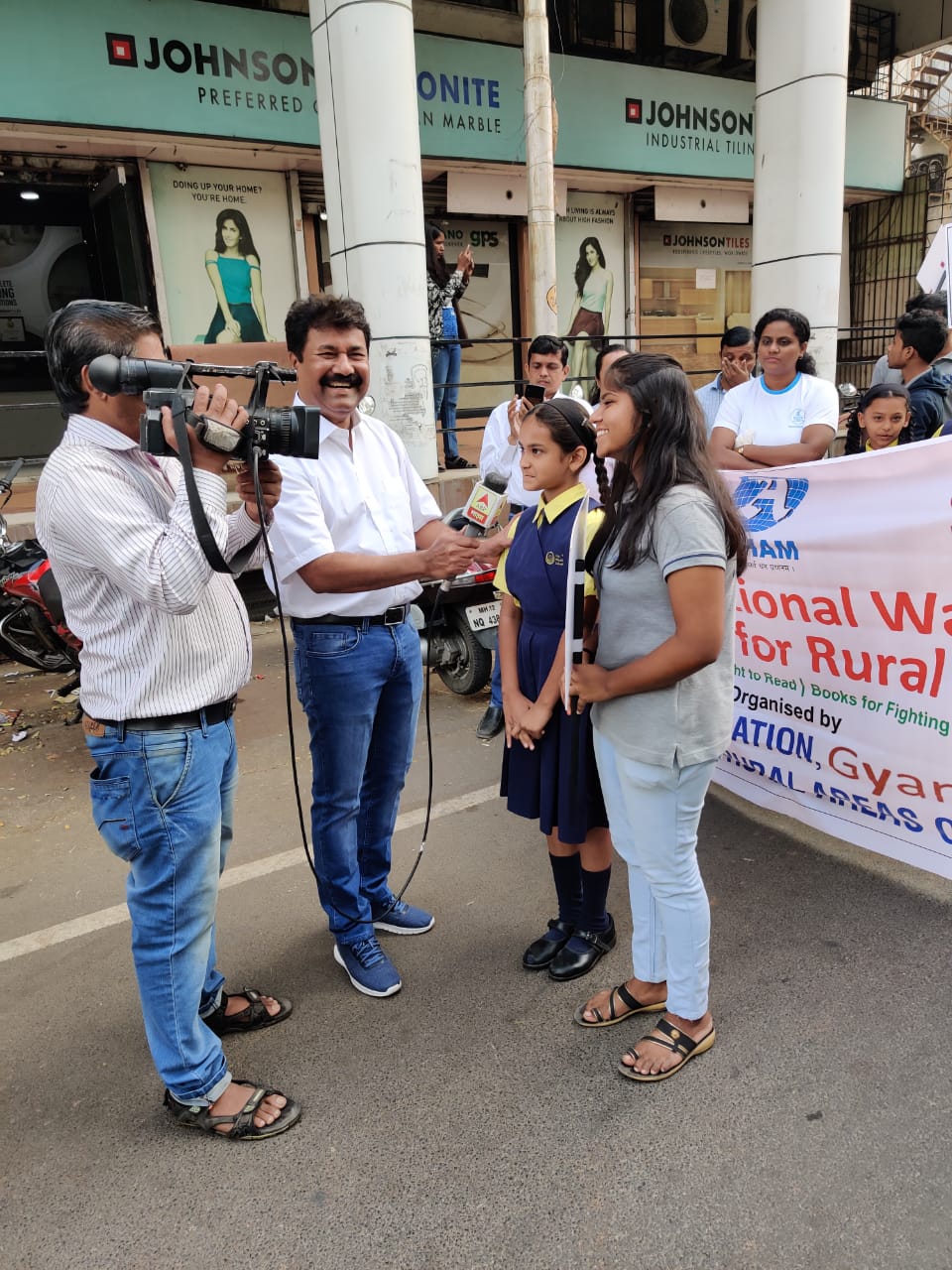 The international walk was aimed to aware the Vietnamese and Indians, of their roles in helping their children’s future with book access. With UNESCO’s support, the walk also created a global movement for World Children’s Right to Read and Fighting Climate Change with knowledge accumulated and trees planted in coming years. 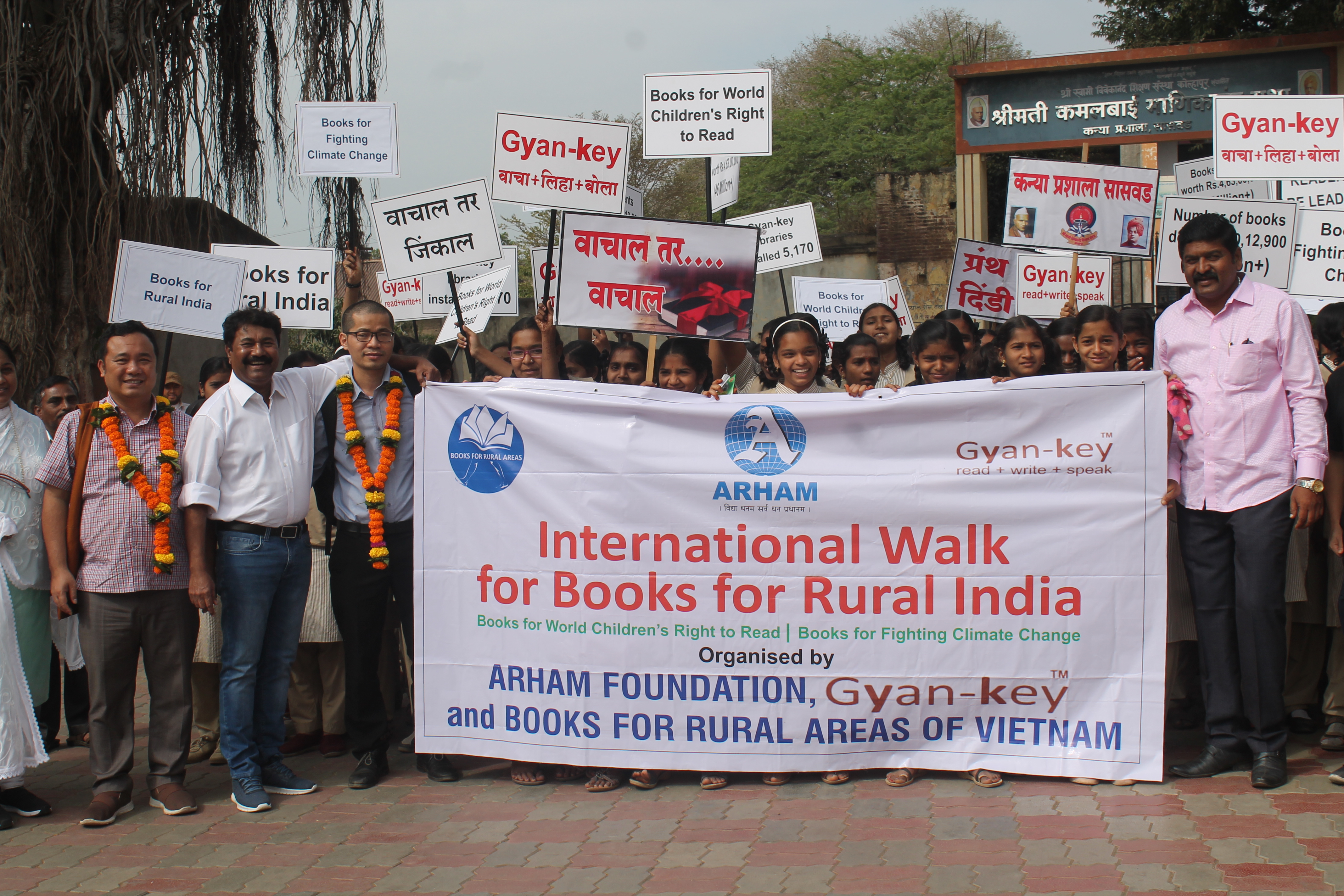 Mr. Pradeep Lokhande commented, "Some dreams are big, mine was a far simpler one and yet a mission of sorts. I quite simply wanted to reach out to rural India and contribute to its development. I set out on this mission 23 years ago. I wanted to know the essence of the various cultures and traditions and soak in its ethos. This was a journey of some 49,000 villages, of which I had personally visited 5,800 across the country. I have received more than 8,50,000 postcards from rural India. Popularly known as the Postcard man of India. Each one of us has an NRV (Non-Resident Villager) within us because ultimately, our roots can be traced back to the villages. Therefore, as an NRV, we can always reach out, support and contribute something meaningful to the development of our rural India. With the help of NRV’s, till date we have installed 5,170 Gyan-key hangers (read + write + speak) in rural secondary schools in 1,840 working days benefitting 12,00,190 (1 million+) students across 8 states. 10,19,200 (1million+) books worth Rs.4,63,00,000/- (46 million+) have been distributed. We have received 1,75,000 postcards and donors have 1,93,000 capturing the student’s responses on books they have read. (You can see this communication in our office). Gyan-key hanger initiative is the most effective way to keep regional languages alive. This is the world’s largest rural reading initiative. Target 94,000 Gyan-key hangers in rural secondary schools across tomorrow’s India. Arham Foundation in association with Gyan-key library hanger and Books for Village Rural Areas of Vietnam planned an International Walk for Book for Rural India on 11th and 12th February 2020 in Camp, Pune and Saswad, Maharashtra, India respectively. The most satisfying result was seen as over 400 urban and rural students participated in this walk with utmost excitement. We also paid tribute to 3 prominent authors (P.L Deshpande, Annabhau Sathe in Pune and P.K. Atre in Saswad) during the walk.

Dr. Atish Chordiya, Co-Founder of Arham Foundation said, "Indian education system has been recognized all over the world. The main traits of our education system is it is value based. These values are imbibed through the thousands of years of history which has seen great rulers, philosophers, scientists, one of the oldest education systems on the plant, birth of various religions such as Hinduism, Sikhism, Buddhism, Jainism etc. It is very important to inculcate these values amongst the children at school level in multi-cultural, multi-religious but highly inclusive society like India. In recent years, India has created its niche in the Science, Technology, Engineering and Mathematics (STEM) education. Today we can see top global companies are being ably led by Indian born or origin C.E.O.s. Indian Engineers, Doctors, Economists, Scientists are a preferred choice all across the globe in governmental and private organizations. On the other hand there is a stark contrast; rural India, which holds more than 68% of total population, due to its high poverty is still way behind the urban India both in terms of education and economy. Having a frugal access to the resources due to whole burden on the State and the Central Governments unlike the urban areas which are supported by the huge private participation. Therefore, there is a need to create more opportunities for the children of rural India. At Arham Foundation, being part of the education delivery system, we try our best to involve our students and parents who come from good social and financial backgrounds, in various social activities being conducted by our NGO, such as, books or study material distribution, arrange their visits to rural schools and they conduct social campaigns for underprivileged children and celebrate festivals with them. The walks which were co-organized by us at Pune (Urban) and Saswad (Rural) saw a huge participation from people from all walks of life. It will definitely be a game changing initiative as we already have been very successful in creating ripples in common man of India through the print, television and online media.

Mr. Nguyen Quang Thach – Founder of Books for Rural Area of Vietnam said, "My life target is to help poor children with book access for their best future. After walking 1,750 kms in Vietnam and taking the classroom libraries to the major parts of rural Vietnam by generating participation from nearly a million of common Vietnamese people, I decided to start my global initiative for ‘Books for rural India’, ‘Books for World Children’s Right to Read’ and ‘Books for Fighting Climate Change’ from India with the help of the change agents namely, Mr. Pradeep Lokhande and Mr. Atish Chordiya, as it is the country with major volume of rural students having very poor access to the books. As I walked along with my other 4 Vietnamese and Indian change agents through the streets of both urban and rural India, I found a very keen interest being generated among the people. Many participated voluntarily and shown their support for this noble cause. They also talked about the fact that people from other country are walking on their streets to fight for the rural Indian children. They expressed their wholehearted support for this movement. The response from the crowd was beyond my expectations. I foresee an active participation from Indian and Vietnamese community to come forward and take this initiative to the millions of rural Indians who are deprived from their right to read. One of the distinct features of the walk was the plantation of the trees donated by Vietnamese nationals named Mrs. Vu Thi Thu Ha and Mr. Vu Van Thoai through around 100 girl students from rural area of Saswad where the class room library was donated by a Vietnamese organisation named ‘Nghia Dung Karate’. This added dimension will help us realize our tagline - ‘Books for Fighting Climate Change’.