Why Narendra Modi is the best Event Manager 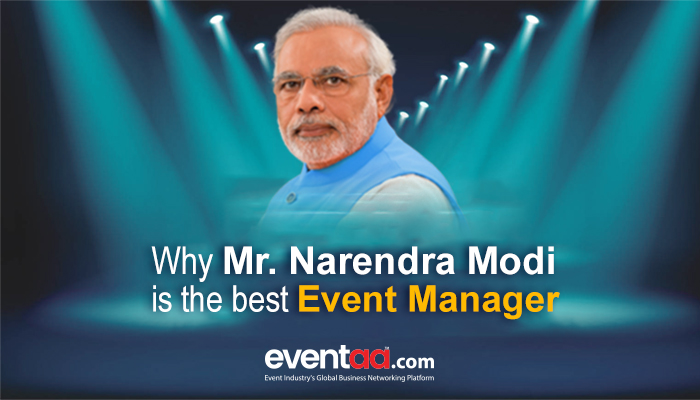 Being surrounded by a sparkling persona is a rare occasion but a rarest of rare when the spellbound auras of such persona ink-down the history. Narendra Modi possesses the same stature and has enveloped multiple skills under the hood influencing mass.

During his last General Elections in Gandhinagar, even L.K Advani (former M.P) called Narendra Modi as the best event manager he had known. Then it was not known that this ability of his, will bag him the India’s highest citizen title (P.M. of India). It was not overnight that he had honed these event management skills but it was his lifestyle in his early political career organizing party summit and events all over India.

He emerged as the dark horse in Indian politics and gradually scaled up his position. It didn’t take much time for him to understand the nuance of the Indian administration and neither for the public to figure out his strategic moves, who acknowledged him with grace. He is an institute in himself, who is a complete package of the eloquent speaker, flawless presenter, and a great visionary.

There are endless qualities of him that truly makes him a public figure but here we are not intending to showcase his political achievements but the witty ideas that he implemented during events. Here we will scrutinize how he was decisive in executing many state-level events into global events and how he pulled out shows and events in grandeur style and impromptu.

Aiming at perfection is observed in all its election campaign and same reflected during his events. Nothing is marked as half attended- whether its event safety barricades, installing designer fixtures, stage arrangement, placing hoardings and banners, or social media marketing.

Whatever their opinions but his event management skills are definitely do-able for event planners. Let’s try to find out why he qualifies in the bracket of the “Best Event Manager” and peep into some of the events that made him popular.

Does any Event Industry match his (Modi’s) standard?

During his tenure as C.M of Gujarat and thereafter, he lined up many events like --sporting events, cultural festival events, business-networking events, and events in all spectrum.

Vibrant  Gujarat is a biennale summit held every year to create business opportunity in the state with the global conglomerate. Since its launch in 2003, the event hit the news headlines and matured over the years in all respect and so does the MoU’s and foreign delegate’s inclusion.

It was the first time ever the government staged such a global audience at this scale. It has reflected a visionary approach of Modi and his counterparts. On the front-stage, he addresses the audience, while at backstage, he takes care the event takes shape with precision and in accordance to event portfolio.

1) In 2017, Vibrant Gujarat trade show exhibited about 1500 stall, to showcase business throughout the week.  Each day of the week is planned and allocated to exhibitors systematically.

2) Wi-fi internet access with over 150 hotspots and additional shareable telecom tower has been created from airport to vibrant Gujarat venue to give uninterrupted net service.

6) Live webcast of the vibrant summit was broadcasted

The event is transformed from an investment summit to a knowledge-sharing and networking meet.

Khel Mahakumbh was another initiative under Modi's supervision to support healthy Gujarat and to celebrate sports and sportsmanship.In the year 2016-17, 30.64 lakhs players participated, and more than 75,000 volunteers were summoned to manage competition at various levels over the period of 45 days.

Again the event set a benchmark for event planners to learn and instigate management skills into their events.

3) Generating KMD-ID for each participate generated to get information

Rock solid stage, huge heritage entrance, colorful laser show, high-security arrangement, well-parsed ground, separate parking zone.  If you see all these on a granular level the management has done an applauding groundwork and didn’t leave any room for error.  Visitors around 800,000 during 9 days of the event is a big number, managing them, as well as running the event programs in parallel demands tremendous planning.

5) Backup plan and medical aid for event disaster or emergency

Kite flying is a culture for Ahmedabad organized by the Tourism Department of Gujarat, but Modi was the architect behind it to make this festival a successful global event.  More than 100 kite fliers from 31 countries had attended the festival, which equally amazed with the setup of the event. Some action points of the event that pleased event planners over the long pavement of the riverbed were:

2) The arrangement of high security and surveillance throughout the event enveloping countless visitors.

3) Special arrangement for boarding and lodging of guests

Event planner would like to engrave these rules on the chit-sheet of event planning, to host a successful event.

He chooses audience as per occasion and events, knowing there are 150 million first time voters during 2013 election.  He didn’t miss this opportunity, and addressed youth at Shri Ram College of Commerce straight from the Capital- Delhi, talking about Gujarat’s development model.

He is a tech-savvy leader and uses technology posthumously in the marketing campaign. He frequently posts on Twitter, Facebook, and other online media to market his campaign, but that remains just like any corner news until he incepted 3D hologram technology to address world’s largest electorate.

Modi kicks event just like any festive celebration, lit up in colorful lights and enthusiasm.  On this “Economic Times” wrote a full article on why Modi’s event is not just any ordinary event but full-fledged stage productions. It involves background sound, light shows, theme-based music, stage design, sky cameras, and LED screens.

Events always loom with uncertainty, no matter whether it’s a small in-house event or it’s a Modi’s colossal event.  One such incident was observed during Modi’s rally in Hubli-Dharwad where his close associates finalize the 63 acres of Jowar fields when known event venue was booked.

5)  Health and Safety regulation for Events

Mass attendance is a regular visual in events. His close associates ensure that event safety measures are maintained before and after events like event crew work with safety measures, woods used for the stage are anti-fire paint approved by the authority like CEPT (Centre for Environmental Planning and Technology), clamps and supporters are used instead of wires or inflammable materials.

Roadshow remain his first preference right from the beginning, maybe, he can connect better with people through it. He also likes to try new experiments during Road Show; during his Rajkot road show, he introduced special selfie zones in the backdrop of surgical strike hoarding and party cut-outs.

His image of a game changer is accounted due to his courageous moves and readiness to implement new and innovative ideas. He doesn’t hesitate to try new things in the existing system and bring diversity. “Mann Ki Baat” is an exceptional epitome of this allowing him to reach the remote areas and villages of the country

Let us know your views if you have visited any such events that left you stunned and think worth notifying here.  This could inspire the“Jugaadu” event planners to reinvent some new ideas to make your next event memorable and mesmerizing.